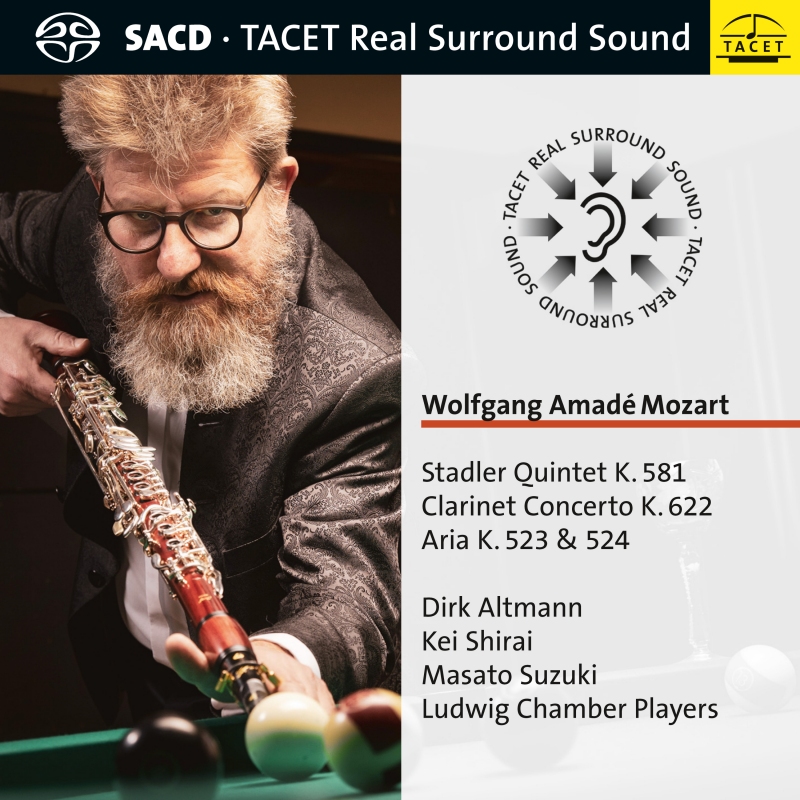 In the many years of preparation for this production I kept asking myself, what was everyday life like for a musician in the 18th century? What drove Mozart, what might his relationship with his colleagues have been like? Were there fundamental differences, apart from technological developments, from today’s music scene?

… in the Concerto the strings act in small groups, and the bass section gives the overall sound completely new dimensions by adding a pianoforte. Altmann plays on a modern bassettclarinete fantastically beautiful.

I know, there are tons of recordings of the everybody’s darling Mozart clarinet concerto! But! If you are serious and studious, you will find some new aspects. For example: If you play with a small, but agil ensemble, it is much easier to show the gestures of the music, without forcing it. To play with a Basso continuo group – in our case with pianoforte – what was common in the times of Mozart, makes the recording more colourful and interesting. Masato Suzuki was a great partner and we had a lot of fun during the recording days. That’s why we chose to play some songs by Mozart adapted for clarinet and piano.
Andreas Spreer is one of the best recording masters I know. The TACET equipment, with his old Neumann tube microphones is incredible. The musicality feeling and incorruptible hearing of Andreas is legendary. It is again a great TACET production.
Many thanks to my beloved colleagues from the Ludwig Chamber Players and the SWR Symphony Orchester. It was a pleasure! Not to mention the outstanding texts by Katharina Eickhoff and the wonderful booklet design by Toms Spogis.

Information about this production, excerpts from the booklet by Dirk Altmann

Mozart’s Viennese years from 1781 were characterized by a great spirit of reform arising from the revolutions in America and France, an aspiring bourgeoisie and secularisation, along with numerous social reforms under Emperor Joseph. The Age of Enlightenment reached its peak in 1789 with the Declaration of Human and Civil Rights in the French National Assembly. Mozart understood like no other how to capture this social shift in his compositions. He was the most fashionable artist with the Emperor, at the royal court, in bourgeois salons and amongst street musicians. Neither later composers nor the pop icons of today have achieved such popularity among all levels of society.
With Kei Shirai, our Japanese-Viennese concertmaster, we have tried to make Mozart’s euphoria and sense of fun at disrupting traditional ways of making music audible in each bar, with each phrasing and articulation. In the quintet, the clarinet sweeps away the classical phrase introduced by the venerable string quartet right at the beginning with a “Haydnesque joke.” After that, it torments the first violin, makes demands of the other instruments in terms of dynamics and agility, only in the next bar to blend quite naturally with the string sound. In the concerto, the clarinet takes the place of a small opera ensemble, from lyrical soprano cantilenas, through virtuoso mezzo coloraturas, to a laughing commentary in the bass line. This is really not an end-of-life piece. We have consciously based the orchestral forces for the concerto on the string strengths passed down to us from the Prague Opera Orchestra. It seemed plausible to us that Stadler’s orchestra at the premiere could have been formed of 3 first violins, 3 second violins, 2 violas and a bass group. At that time, continuo playing was still common practice and so we added a pianoforte to the cello and bass. I would like to thank Masato Suzuki for his wonderful ideas and inspiration, which made the recording sessions a real pleasure. On a whim we decided to round off this CD with the two songs K. 523 and K. 524. I am also grateful to my colleagues in the SWR Symphony Orchestra. With them I was privileged to go through the “enlightened” school of Sir Roger Norrington, and the foundations of this recording were laid in the many years of his conducting at the Radio Symphony Orchestra Stuttgart

Previous post What I did in the past two years